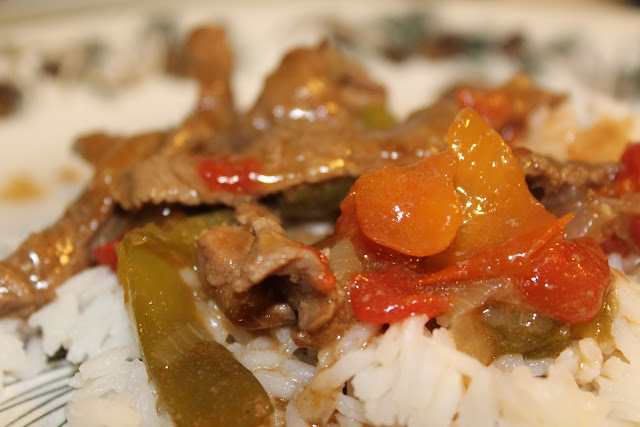 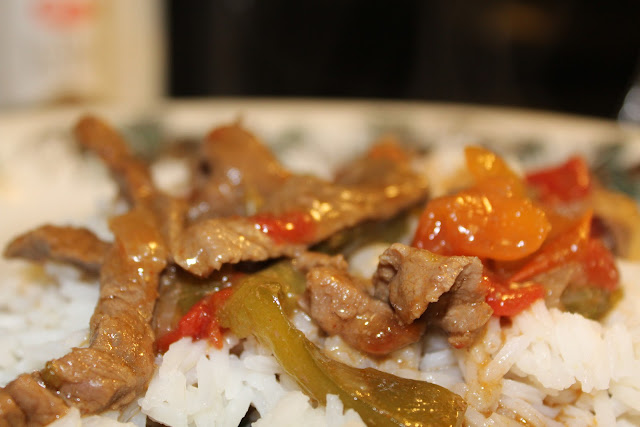 This is one of my favorite Pepper Steak recipes which of course I found on Pinterest...I have made it a few times and we all love it! Nick likes the meat super tender so I do all the steps and when it says to "cover and simmer for 45 minutes" I transfer it to the crockpot and let it cook a couple of hours on low...then when we are ready to eat I transfer it all to a pan and mix in the cornstarch and soy sauce...anyways, here it is!

Add sliced onions and bell peppers. Continue to cook until vegetables are wilted.

Cover, and simmer for about 45 minutes.

Stir into steak and cook until thickened.

One more thing...last night when I made it I added a can of Rotel tomatoes instead of the 2 large tomatoes...that worked nicely too! 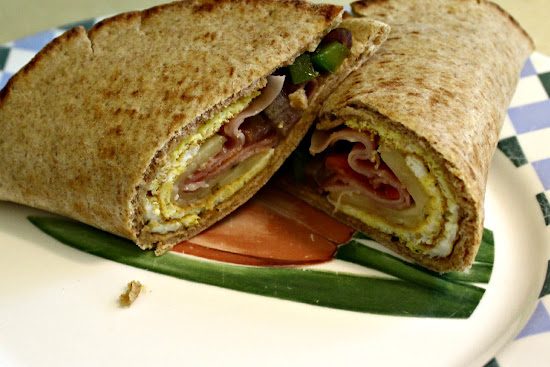 Posted by Tanya Breese at 6:47 AM No comments:

Email ThisBlogThis!Share to TwitterShare to FacebookShare to Pinterest
Labels: breakfast

One thing I miss from Ca is great Mexican food. For a sit down Mexican restaurant, El Torito was one of our faves. I found this recipe for the enchilada sauce and have made it a few times, it's the BEST!

Heat oil in large saucepan. Add the flour to the oil and made a roux. Stir and cook over medium heat for 2 minutes until it becomes brown in color.

Add the chile powder, beef broth, tomato puree, oregano, cumin, garlic and salt to taste to the roux and simmer over low heat for 15 minutes. 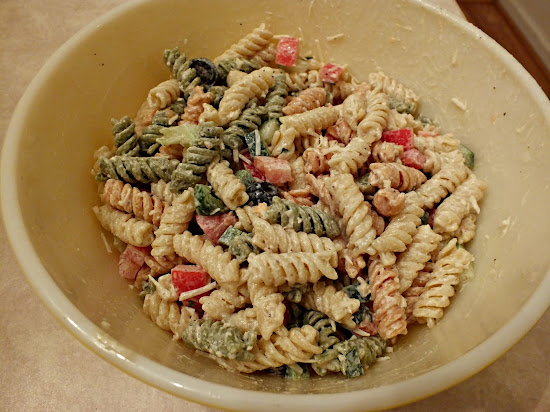 I'm not a huge fan of heavy mayo based salads. A little bit is ok, too much will make me gag. So a mom brought this delish pasta salad to our football banquet and I loved it so I've been making it ever since. I made one little adjustment and added fresh basil and freshly minced garlic because I can :)

put as much of the veggies in as you like, no rules! i also like red onion in it too sometimes.

mix together and enjoy! i can seriously eat the whole bowl :D 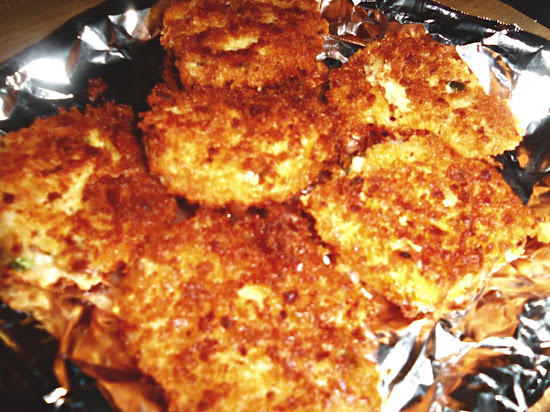 I know, I've pinned things like crazy, just haven't done anything or had time to tell about it. I've cooked a few things. Every time I plan my menu, I add something new. Like these. These potatoes were super, duper good! Serious!

Here's the recipe, from Allrecipes:

The only alterations I made was the egg. I didn't mix egg into my mixture after reading some reviews. I did use an egg to dip the potatoes in.

You can find the original recipe HERE! 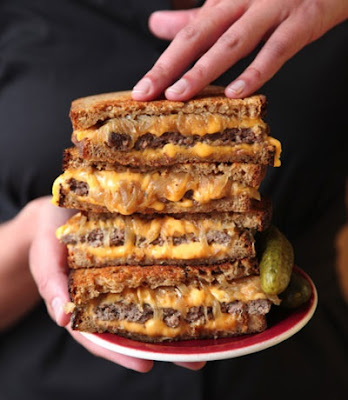 I was scrolling through Pinterest one day, imagine that lol, and Braden (one of my 10 year old twins) was walking by and saw this pic of the Patty Melt and said "That looks good" so of course I pinned it because I'm all about pinning stuff that my kids might like, and I had to agree, it did look good. I've never had a Patty Melt before but it looked like something worth trying and that it was!

1. Season the beef with salt and pepper. Divide meat into six 1⁄4"-thick patties that are slightly wider and longer than the bread.

2. Heat 2 tbsp. oil in a 12" cast-iron skillet over medium-high heat. Add the onions, season with salt and pepper, and cook, stirring occasionally, until softened and browned, about 12 minutes. Transfer the onions to a bowl; wipe out skillet. Working in 3 batches, heat 1 tbsp. oil in skillet over high heat. Add 2 burger patties; cook, flipping once, until well browned, about 4 minutes total. Transfer patties to a plate.

3. Top each of 6 bread slices with some of the onions, a cheese slice, and a burger patty. Top each burger with a cheese slice and a piece of bread. Using a table knife, spread butter over the top and bottom of each sandwich.

4. Heat a 12" nonstick skillet over medium heat. Working in 3 batches, cook sandwiches, flipping once, until golden brown and hot, about 6 minutes.

And here's how I did it...I mixed the ground beef like it said to and cooked on my griddle. I separately cooked my onions up in a small skillet and I buttered my sliced rye break. Once my patties were cooked, I sat it on the un-buttered slice of rye and topped that with the cooked onions and then topped that with the cheese (I used American because I knew my kids would like that) then I topped that with the other slice of buttered rye, buttered side up and cooked it on the griddle like a grilled cheese. Oh these were so yummy and my kids and husband all liked them. I seriously could have ate 2 because I thought they were that good!

I took pictures of mine but they turned out really sucky! (the pictures, not the sammies!)

Linking once again to 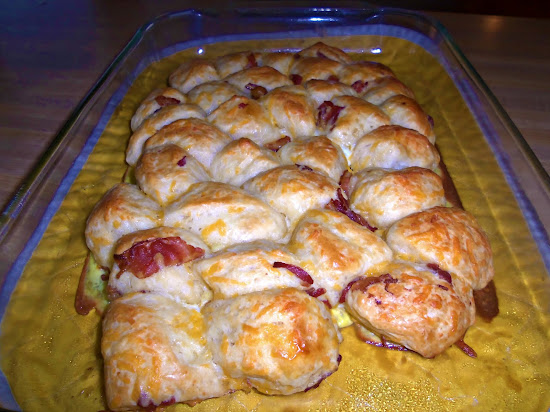 Weekend mornings we usually have a big breakfast. It is, after-all, the only time of the week that we are all together in the morning to eat, or usually anyway. I'm always looking for something new to try that everyone will like and this seemed like it would do the job, I mean it has bacon, biscuits, cheese and eggs...who doesn't like that stuff?

Sooo, tried it on Sunday and it was purty delish! The boys really liked it a lot and had seconds even.

2 things I changed: I used about 6 pieces of regular bacon, just cooked it up then crumbled into the mixture and I didn't use green onion. I just wasn't in the mood for them :)

The original recipe is found here!

Linking up with the first ever Pinned It, Made It! Check out more Pins that folks have tried out this week!